The truck’s left rear wheel wobbled. It was a minor problem seemingly related to the brake adjustment done earlier this week, but we needed to go to the nearest Toyota dealer to have it checked out. So we were up at 6:30am on Wednesday and at the dealer in Simcoe when it opened at 8am. However, we couldn’t produce a shimmy. These things happen and sometimes they fix themselves, we were told. Twas ever thus, we said. We pushed on and went to Tim Horton’s for breakfast.

Tim Horton’s is the Canadian answer to McDonald’s. In Port Dover, the small town where we began our ride, the local diners were closed for the season but Tim Horton’s was packed. The food was good enough and the coffee was great. It’s consistent and it’s quick. Signs posted inside say you aren’t supposed to stay more than 20 minutes, or else you’re “loitering.” Something important is lost in this, but you can’t place a dollar value on it.

We had about 45 miles to ride to our destination, which was a provincial park east of Dunnville called Rocky Point. We started off through agricultural fields but quickly noticed that homes were lining the Lake Erie shore at this point, a change from yesterday’s agricultural reserve. Some of the homes were new McMansions and some were old working-class cottages, but they packed every inch of the shoreline. It was what you’d expect to see along a lake in Upstate New York.

Then the scene abruptly changed as a large mill loomed in the eastern skyline. It looked like a steel mill. Cyclone fence soon lined both sides of the road. Indeed, it was U.S. Steel’s Lake Erie plant, and it was enormous. We rode through it for over a mile. It had its own pier and conveyor belt, where ships delivered ore from the Iron Range or scrap cars from Cleveland. We noticed no rail lines, so the finished product also had to leave via the lake. East of the mill was an Ontario Power plant, gas-fired by the looks of it, and east of that was an Esso oil storage facility. We were in an industrial landscape for three or four miles.

We eventually went back to the more familiar lake cottages and rode along Lakeshore Road, which was very pretty. Lake Erie was just to the south of us, and beyond the houses on the north were agricultural fields. It went on for a good 15 miles like this. But the rain that had been predicted for the afternoon arrived early and made things a little more businesslike. We paused under a tree, put on our gear (jackets, neoprene booties, a baseball cap under the helmet) and pushed on. We also paused for a fist bump when Jim’s trip odometer hit 3,000 miles. We sure have been doing this ride for a long time, I thought. The rain continued off and on for the rest of the day.

We went through several small towns and finally through Dunnville, where the Grand River empties into the lake and a fisherman stood in his boat just downstream from a weir. We stopped at a grocery store and I watched the bikes while Jim went inside. Women streamed in and out of the store. Canada’s Thanksgiving Day is on October 13, and they were stocking up. Thanksgiving feasts were brought to Canada by Tories who fled the United States after the Revolution, but the date (the second Monday in October) wasn’t made formal until 1957.

The women paused while a man on a tricycle rode by very slowly, so slowly that an ordinary person would have gone faster by walking. But this man had had a stroke or some other crippling neurological disorder, and he was riding his bike because he needed support to walk. I helped him park the bike, retrieved his footed cane, and set him up behind a shopping cart. He slurred his words badly but said that his name was Ernie and that he lived around the corner; that he went out like this for food every three days; and that it took him about two hours to do it. Then he thanked me and pushed the cart into the store, walking slower and more variably than a toddler. That Ernie is one tough little sumbitch.

The rain intensified in the last six miles to the park, and the last two miles were on a sandy road that coated our bikes and clothes with mud. We put up the camper and slowly washed and dried ourselves, cursing the day and moving around in the small camper like sailors in a submarine. Luckily the showers and a laundry room were nearby. After we all regained our composure, Jim and I left Sara in peace and went back into town. We bought beer at a government store and sat at Grandad’s Donut shop, the one place in Dunnville that has free wi-fi. We returned around 6om to find a south wind screaming off the lake at a good 30 miles an hour. Trees sheltered us from this, but the wind-blown rain continued until we went to bed. 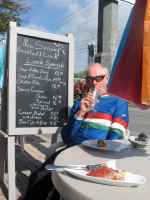 The rain stopped and the clouds cleared, and we woke up to a blue sky. Rocky Point Provincial Park has a sandy beach, but it also has shelves of shale sticking out into the water that give waves an impressive place to crash onto. We had a short day before us, just 30 miles, so we dawdled and dried things out and didn’t start riding until about 11 am. We rode through more cottages and lakeshore roads until we reached the town of Port Colbourne, where the Welland Canal enters Lake Erie. The Canal allows ships to avoid Niagara Falls when they travel between Lakes Erie and Ontario, and we stopped for lunch at a canalside café in hopes that we’d see something big pass by, but no luck. I did observe that Jim looked very Continental in his sunglasses, however, drinking une milkshake.

We continued east on the Friendship Trail, a paved bike path that runs from the Canal to the Niagara River. It is part of the Greater Niagara Circle Route, a 90-mile rectangle of mostly paved off-road bike paths that links the canal, the river, and the two lakes. The Niagara Region of Canada is wired for bicycles. It has lots of helpful signs and even a train that can take your bike from Toronto to Niagara-On-The-Lake, so you can ride back on yet another paved path.

We rode into Ridgeway and met Jay and Joan Janowsky, two Ithaca friends who own a cottage here. They kindly delivered Tania and her bicycle so she could join the ride for the next three days. Jim peeled off for the afternoon while Tania and I rode to the Peace Bridge and back with the Janowskys. There is a great view of the Buffalo skyline from this trail. We returned to a nice motel, met up with Jim and Sara, had dinner with Jay and Joan and their son, and got ready to start through New York.