We had breakfast on Friday the 19th at the home of Jeff Tanner, the newly hired assistant city manager of Freeman, South Dakota. Sara had met him on the phone the day before, and he wanted to learn about the ride. We did the best we could to pack six weeks of stories into the hour we had together, and in return we met an interesting guy in an unusually progressive small town. Freeman has a clock tower that chimes every 15 minutes until 11pm, when it thoughtfully stops. The central business district is getting a facelift. As we left, volunteers were gathering in the city park to build a playground. Jeff is starting his career in public administration here, working on a Ph.D at night, shuttling back and forth to Denver to see his girlfriend, and riding his bike whenever he can fit it in. Jim and I coveted his youthful energy. He had good tips on county roads we could use instead of the state highway, too.

The south wind was still there but it wasn’t as fierce. We turned onto route 44 with a 70-mile ride before us. Flat and straight; corn, soybeans, corn. Jim coped in his usual way, by hunting for roadside treasures. The day before, he had found a heavy pair of pliers painted DOT orange. 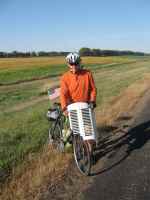 Today he started off by bagging a plastic tractor grille (he didn’t keep it). We rode for an hour and came into Parker, the seat of Turner County, which has a beautiful 1902 Courthouse and also beautiful donuts on display just down the street. We gorged on peanut logs and fritters at Herding’s Bakery and decided that we would add a pastry survey of the Upper Midwest to our work list. Five miles down the road I started having second thoughts about this plan. Eating donuts before a workout is probably similar to getting drunk before going to work at a convenience store. It seems like a good idea until your stomach gets back to your brain.

The county road we found was so quiet that we could ride down the middle of the asphalt for long stretches with no hands on the handebars. We stopped to inspect abandoned schoolhouses and farms once or twice. Mostly we kept going until we reached the City of Tea, SD. Really.

The story is that the locals had a hard time coming up with a name when they applied for a post office at the turn of the century. They were German immigrants who saw afternoon tea as a necessity. Now there is a teapot collection in City Hall and the annual Teapot Days festival features fair food, fireworks, a mock bank robbery, and mud volleyball. We met up with Sara at a donut shop. The iced tea was strong and home-brewed.

Tea is a few exits south of Sioux Falls on Interstate 29, and we clipped the southeast edge of the metro’s sprawl as we continued east. The traffic difference is noticeable when you get to outer suburbs. City drivers don’t pay attention as well as rural drivers do, or maybe they’re just meaner. They are more likely to pull out in front of you, or to pass you at highway speed without moving over.

We rode past the construction site for Harrisburg High School, which is clearly planning to be engulfed by the housing tracts that loom just over the northwest horizon. “I’m not ready for this,” said Jim. “Let’s get back to the country.”

Tania’s flight landed in Sioux Falls around noon. She expertly commandeered a rental car, made cell phone contact, and caught up with us at the Iowa border. There was no sign on the county road welcoming us, but we knew it was Iowa because we rode across the Big Sioux River. The soil had gotten darker. There was more moisture, too — enough that we saw frogs and turtles for the first time. The corn was thicker and taller. After 20 miles, another flat tire, and a milkshake at a convenience store in Larchwood, we stopped for the night at the first real Iowa town, Rock Rapids.

We took rooms at the only motel in town (which was clean and a steal at $55) and went into recovery mode.

Tania had brought anti-puncture liners from Cayuga Ski & Cyclery. I put them inside my tires while she sat nearby with Jim and Sara, drinking wine and amusing herself at my expense. Then we went for a walk downtown to the only local restaurant we could find. What a find it was.

The B&L Vintage Brew And Sugar Shack serves home-cooked meals in an antique store. It is family owned and run, and the woman who waited on us was eager to share her stories of Iowa’s Republican Primary. She told us about how many hands John McCain shook when he came through town in January (one, hers) and who was nicest (Mitt Romney and his wife). Her sister overheard and came out of the kitchen to tell us that Rudy Giuliani had given a speech standing right over there, but that nobody liked him much. The food was great and nobody was in a hurry. It was great to have Tania back on the crew.

Rock Rapids wasn’t a wealthy place, but its Craftsman houses and ornate commercial buildings evoked a much more genteel past. It has been the starting point for the Des Moines Register’s Annual Great Bike Ride Across Iowa (RAGBRAI) several times. The B&L Café people went on and on about how exciting and fun it was when the riders came through. We resolved to come back (for the umpteenth time), and the café owners said they’d remember us if we did. Stuffed and well-loved by local townsfolk, we waddled off to bed.

Saturday the 20th was the sixth straight day of rides averaging 70 miles or more, and Jim and I were tired. We were spurred on by the thought of back-to-back rest days on Sunday and Monday, along with Jim’s return to his hometown of Jackson, Minnesota. We also found a county road that would keep us off of State Route 9 for most of the day.

We set off early and got off the state road before traffic built up, and soon we were riding the roads of Lyon County again. Every so often we’d see an abandoned farm and outbuildings that seemed to talk, although you had to stop and listen. And after an hour Jim stopped to announce that we’d ridden 2,000 miles. We banged fists and moved on.

We took a long lunch break in Sibley, where the High School football team (the Generals) was preparing for a big homecoming match against the Indians. Tania caught up with

us there and excitedly ran into the local variety store, where she found flour-sack dishtowels and postcards that showed an ear of corn big enough to fill a flatbed.

Another unique aspect of riding through Iowa is the smell. Vertical integration is an economist’s term for the business practice of increasing one’s profits by centralizing the production and refining of a finished product. One example is putting a hog farm in the middle of a cornfield. Feed your corn to hogs and you can sell pork instead of corn. We saw a lot of this and the pork in Iowa is delicious, but the farms smell like a truck-stop bathroom that hasn’t been cleaned recently. We wondered where they put the poop.

Ethanol is another example of vertical integration. Many gas stations in Iowa sell something called “E-85” for about a dollar a gallon less than regular gasoline. It’s 85 percent ethanol and made from Iowa corn. And in many of these cornfields, we saw huge wind turbines that were just being installed. The heartland is turning into a new kind of power plant.

Jim struggled to the top of a 50-foot ridge that is near the highest point in the state of Iowa (1,670 feet). After a 30-mile slog through traffic on Route 9, we came into the region local people call the Great Lakes of Iowa. These are three large glacial lakes – Spirit, West Okiboji, and East Okiboji (pronounced Oh-Ka-BOH-Gee) clustered just south of the Minnesota border in Dickinson County. Okiboji is derived from a Dakota Sioux word meaning “place of rest.” Perfect.

Like the Finger Lakes, Iowa’s glacial lakes have been invaded by out-of-towners with money. And like the Finger Lakes, they boast a fine university, the University of Okoboji.  Except that this one is entirely made-up by local people who maintain the prank to fool tourists and then sell them t-shirts. Jim and Sara found a quiet RV park while Tania and I checked in at the Inn At Okoboji, which is a great old resort and a fine place if you avoid the drunken louts in the wedding party. The lake is beautiful and peaceful and quiet, and we are all exhausted.

Writing about social change and how it happens.

You are advancing rapidly or it seems from this almost stationary observer.

I’ve just sent out on reconnaissance checking out Erie Canal features, especially searching for signs of the original canal section (hard to find).

It took team work to locate this one (see next comment for link).

This canal park allows viewing of the original canal, and the first and second upgrades. I’ve not seen other sites offering that, but will continue to search.

How much of the Erie Canal will you be following?

When I started rowing, my coach told us that there were three rules:

oh yeah, will? is that why you stopped specifically at a donut place when I visited you in brooklyn? death, will. death and losing. (not to you though dad, you’re riding your bicycle across the country. that automatically makes you a winner.)

Ok you kids, pipe down back there or I’m going to have to pull over.