While Brad went off with Sara to Bozeman to have his bike looked at, and to later hitch up with Tania, Paul and I biked from Livingston to Emigrant on the east side of the Yellowstone River and up against the Absaroka Range. It was a RARE sunny afternoon and we soaked it up with a wind to our back for the first hour. The wind later did a 180º and we had to beat a path into it. I made a note to tell Paul’s concerned wife, Annette, that there was no traffic.

We had great close up views of the Absarokas. It was an ideal valley setting with the mountains on one edge and the Yellowstone River on the other. In fact we saw many ideal settings for residential development in Montana. Apparently so did the developers.

We saw many entry gates to potential subdivisions. Some were elaborate with fighting bronze elks, ponds, and gate houses to keep wanderers like us out. What was missing was houses. We saw only one house being built in more than a dozen empty subdivisions. I did envy their access to large rocks, logs, and loads of “housing boom” money.

Our stay that night after a 60+ mile ride was in a very upscale RV Park along the Yellowstone River that did not allow tents. However, they thought the bike trip so novel they allowed brother Paul to set up his tent under the pull out of the camper.

We try to avoid these RV Parks. They make us look and feel like poor country mice with our pop up camper. They do, however, have wireless internet connections and great showers to help offset the $30-$40 cost. It started raining that night (again). We had to take down and stow wet gear (again). This is not our favorite chore. It makes us lust for a “real RV”. 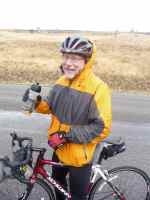 The next day Brad and Tania were still soaking at Chico Hot Springs. Paul and I donned wet gear and took to the road in a 42º drizzle, but we did have a good tail wind from the north. A drizzle is survivable on a bike at 15-20 mph. It does help keep the feet clean.

The clouds ahead seemed to indicate that more than a drizzle was in the future. Right again: we ran into a downpour that pooled water on the road and soaked us to the bone, especially when the occasional car passed us. Paul’s bike developed a wobble and soon a flat rear tire. We dashed back a quarter-mile to a US Forest Service Campground, where he tried to find shelter behind a “vault toilet” (aka “outhouse” or “pit toilet”). It did not occur to use to seek shelter inside, where the odor would actually have been less intense than it was standing next to the vent pipe on the back of the structure. We didn’t know it then, but we were acting confused and hypothermia was setting in.

Out of nowhere a young woman appeared and walked into the toilet.

What was she thinking when she saw two men hiding behind the toilet tearing into their bike bags for tools? Such composure she had. We did not. Pedaling had kept us minimally warm in that cold rain, but as soon as we stopped the cold sunk in. A minute later a voice asked, “Would you like some tea? Earl Gray or Black?” Out of the rain appeared Jared Moore from Bozeman with a mug of hot water and a choice of teabags. We learned that he was from Blue Earth, Minnesota. Paul and I were born and raised in Jackson, Minnesota. I played sports against Blue Earth. What a small world, and what a good soul Jared was.

In spite of being soaked and cold, we were hoping to ride to the gates of Yellowstone, but in my panic to get us back on the road we made a simple error and the new rear tire went flat within 100 feet of the fancy outhouse. What might that error have been? Contact me for the answer.

Sara came to our rescue and we rode through the gates of Yellowstone near Mammoth Hot Springs. I made a mental note to look up Jared’s dad when we rode through Blue Earth.

One thought on “Jim on Day 21: Unexpected Tea”