Thanks for contributing to my ride around Cayuga Lake last Saturday, Sept. 15.  You helped me raise $395 for the Southern Tier Aids Coalition.  I rode with Tania and my neighbor, Nancy Wells, as a team called Cats of Short Street: together we raised $1,735, of which Nancy raised $995.  Nancy smacked us down on the asphalt, too.  She and her riding buddy, Lynn Wiles, rode away from Short Street at 7am and we didn’t see her again until Seneca Falls, 50 miles later.  We talked to Nancy for about two minutes before we waved bye-bye to her receding backside, and we didn’t see with her again until after she had taken a nap and showered for dinner.  She tried to make us feel better by telling us how hard it was for her.

Tania and I are firmly in the plodding tourist category of road rider.  We have done the AIDS ride several times, and this year was typical. It was absolutely a great day on the bike.

The ride starts near daylight and heads north on Route 34, up the east side of the lake, and there’s usually a good sunrise to be seen. I made an unsafe move and snapped this image as I started off, near the middle of the pack of about 400 riders.  Click on the thumbnail image to see the whole photo. And don’t try this yourself.

But then I did it again. 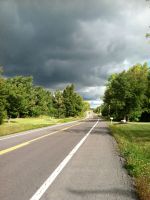 North of the village of Union Springs, about 35 miles into the ride, the clouds got thick enough to be threatening.  Luckily, they never opened up. A cold front had come through the night before, and we rode north into a fresh 15 MPH north wind — not enough to be really annoying, but enough to keep the jacket on and also to be a big relief when we got to Routes 5 and 20 and turned left.

One of the best things about spending the whole day on a bike is that you get long stretches of time to think.  I don’t usually do much heavy mental lifting on a ride, but every once in a while something I see will spark an association.  Just north of Aurora (mile 30), several fire trucks, ambulances, and then civilian trucks sporting store-bought emergency lights passed us headed south, sirens bleeping and blooping.  At first I thought about how great these volunteer first responders are — it’s 9:30 am on Saturday and the beeper goes off, and it doesn’t matter what you’re doing, you jump in the car and speed off to help somebody.  Truly they are heroes, blah blah blah.  But then I had a second thought, which is that this is probably the high point of the weekend for these guys (and they are almost always guys).  Living in Union Springs probably gets pretty boring — I mean, middle age gets boring anywhere, but in Union Springs, the sameness of the days is probably acute. So how great is it to do a little legal speeding, maybe make some noise with your siren, see a fire or some other distress, and then come home with a big juicy story to tell everybody you see for the rest of the weekend?  Everybody wins, I think.

The STAP volunteers made us feel like heroes all day long, cheering and holding up signs and so on.  We tried to remain low-key in our responses, but it did work.  Praise always works.  They fed us well at the rest stops and at lunch in Seneca Falls, where we saw Nancy getting one of the free massages (she said it was the best massage of her life — context matters) before she sped off.

The ride home on Route 89 was pure gravy, with a tailwind and sunny skies.  and it’s always great to stop at Cayuga Creamery in Interlaken, the home of truly superior frozen custard.  Another great thing about riding is you can eat whatever you want and not feel guilty.  In fact, you need to keep tossing back sugary stuff all day long.  Coach says to.

We got back to the house about 3:30 pm, a full hour earlier than we had in previous rides.  Part of it was that I only rode 85 miles this year instead of the full 100, but it was also important that Tania has been going to the gym pretty religiously.  She is 15 pounds lighter than she was when we did the ride in 2011. Do not bet against a Werbizky.  And thanks to my nephew, Morgan Bausman, for snapping this great photo.  You cannot possibly imagine how good it felt to take a hot shower just after this picture was taken.

Hey, thanks a lot for your help.  And if you’re a rider, consider joining us next year.  It’s a great time, and it raised $216,000 that will help local people with HIV lead better lives.