The rain tapered off and left behind a stiff north wind. Added to an air temperature in the 40s, it meant that our last day was also one of our coldest. We left around 11am after my old friend Jon Crispin, a professional photographer, showed up to record the festivities. We had 25 miles to go before the end of the trail at Wells National Estuarine Research Reserve in Wells Beach, Maine.

Traffic remained heavy but we were sheltered from the wind, and before too long we crossed the state line and turned east on state route 9. The road was flat and before 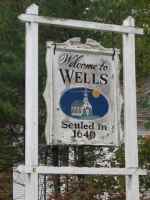 long the buildings thinned out. We rode thorugh a coastal deciduous forest that was being stripped of its leaves in the raw wind. We reached the town of Wells and turned north on US Route 1, picking our way through the cars and broken asphalt and closed fish-fry restaurants until we reached the entrance to the Reserve. It is a beautiful spot, a preserved farm complex on 2,200 acres, and we spent an hour talking with scientists and the President of the Board about its dual mission of research and education (see separate post).

About 2:30 pm we threaded our way down Drakes Island Road to the Preserve’s beach, where we ceremonially dipped our tires in the water. We also unveiled the hat of Al Craig, in whose memory Jim and Sara made the trip, for the last time. Sara brought some bubbly and we had a toast, but it was too cold to stay long. So we went to a nearby restaurant and said our goodbyes over tasty bowls of real clam chowder. Then it was time to disband.

The trip ended well. We finished in good shape physically, and Jim and I still like each other enough to plan more rides together. Not until it warms up, though. The three of us finished up so tired, and with so many unprocessed memories and emotions, that we all felt stunned. In the weeks after the trip ended, some of those memories came bubbling back up in my mind up at odd moments. It made me think of a big pot of soup simmering on the back burner, its flavor changing slowly over time. This trip will be nourishing us for a long, long time.