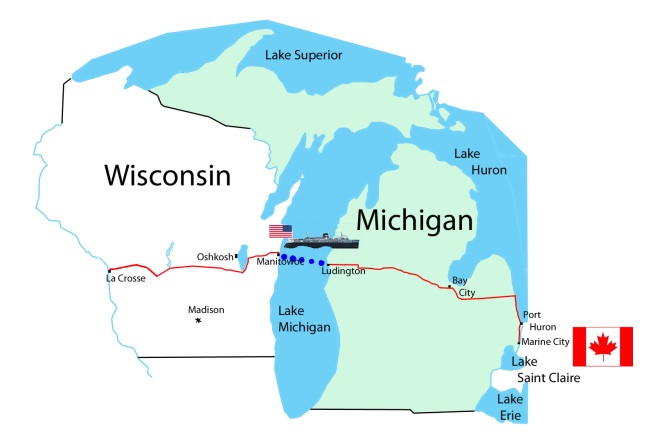 We rode across the Mississippi River into LaCrosse, Wisconsin on Friday. September 26 and for the rest of the day we were on dedicated bicycle trails. We started with the Three Rivers Trail through the city, then rode on the LaCrosse River Trail to Sparta (parallel to State Route 21) , then on the Sparta-Elroy Trail to Elroy (parallel to route 71). On Saturday we continued east in the vicinity of State Routes 82 and 23 to Green Lake. Most of this day we were on county roads that ran parallel to the state highway. On Sunday we continued picking our way through county roads, staying near 23 until it reached U.S. Highway 151 at Fond du Lac (Lake Winnebago). We continued on 151 to the shore of Lake Michigan, and stayed in Manitowoc at the home of Michael Retzinger, his wife Amy Tiesol, and their daughter Ceci.

Monday the 29th was a rest day. We boarded the S.S. Badger car ferry in the afternoon and crossed Lake Michigan to Ludington, a five-hour trip. On Tuesday the 30th we began riding east through Michigan on county roads in the vicinity of U.S. Highway 10. Near Luther we picked up the Adventure Cycling Association’s “Lake Erie Connector” route. This kept us on blue highways that are near U.S. Route 10. We slept in the woods on Tuesday and in Midland on Wednesday. On Thursday we continued through Bay City and then zig-zagged southeast on state and county roads, staying in Caro. Friday, October 3 was the only 100-mile day of the trip: we passed through Brown City, Capac, and Memphis, and then picked up a bike trail along the St. Croix River at St. Clair that took us to a state park south of Marine City. We started through Ontario on on Saturday, October 4, after taking a ferry across the St. Claire River.