Here are a few things you might not know about Devil’s Tower. First, it is a site of major spiritual significance to several Plains Indian tribes. Native Americans regularly come to the Tower and tie prayer cloths on the trees around it. You’re not supposed to touch them.

We got to Devil’s Tower at 8am, before it was inundated by busloads of tourists, and walked around the base for a half hour. You might know that the Tower is a world class site for “crack” climbers, who shimmy up cracks in rock faces with the help of ropes and steel chocks. The second thing you might not know is that the Indians don’t like this activity. 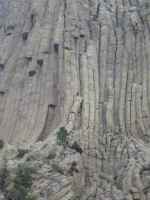 We counted ten people in four parties on the rock face, and several more were on their way to the base when we got back to the car. Look closely at the center of the close-up photo of the rock face and you can see two of them. A Sioux medicine man is quoted in the visitor’s center as saying, “When people climb on this sacred butte and hammer metal objects into it, the tower is defiled . . . It is like they pounded something into our bodies.” A climber is quoted next to the medicine man, saying something like, “We touch the monolith and measure it by our sweat.” I think the Indians should win this one. They were here first. But the National Parks Service merely asks climbers to stay off the rock during the month of June, and most do.

The third thing you might not know about Devil’s Tower is that it’s crumbling. It is a big hunk of granite, a volcanic intrusion that was originally several hundred feet below the earth’s surface. It emerged as the Belle Fourche River eroded the soft stone nearby, and the six-sided columns that run up its face are cracks that formed as the stone was exposed. The base of the Tower is surrounded by big boulder fields, and although geologists estimate that no big columns have fallen in the last 10,000 years, they are sloughing off. In several hundred thousand years they might be calling it Devil’s Pinkie.

Many buses and big RV’s were in the parking lot when we returned from our hike, including

a load of kids from Great River Middle School in St. Paul. This is one of the only public Montessori schools in the country, explained a teacher, and part of their curriculum is taking kids on a three-week camping trip to Yellowstone, the Tetons, and the Black Hills. The kids stay in tents and have homework assignments every night. They were great kids. They cooed and made excited sounds when we told them about the bike trip. Jim and Sara, who spent their careers counseling young people, were enthralled.

We rode out of the campground around 10:30 am with 65 miles to go to Spearfish, a town about 10 miles east of the South Dakota line. The Black Hills really are black

when viewed at a distance, and we rode up and down buttes and through lush green valleys. It was a day of low clouds, and they acted like an acoustic damper; everything was quiet and still. One section of State Route 24 had had its asphalt cracks painstakingly repaired with lines of tar that seemed to wiggle and squirm as you rode over them.

We went through Hulett, a compact village that has its own school, newspaper, medical clinic, and football field; and Alva, a hamlet that didn’t seem to have anything going for it except for seven adorable kittens living under the post office. Then we rode through a section of Black Hills National Forest that was even more stately and verdant than the cattle ranches had been. We paused for a fine lunch in Aladdin (pop. 15) at Cindy B’s Café, which was hopping. Everyone seemed to know everyone else, and they chatted easily with us. It was very pleasant, and it took a while. Cindy B. made me a grilled ham and cheese sandwich that had about a pound of incredibly tasty home-cured ham in it. It isn’t wise to eat a heavy meal before exercising and I felt like I had Silly Putty in my guts all afternoon, but it was worth it.

We rode south on state route 111 and then east on a frontage road that ran parallel to Interstate 90. On this road was the

Vore Buffalo Jump, which was closed for the season. It is a sinkhole that was used by Plains Indians as a convenient way of killing lots of buffalo at once, in the days before they acquired horses. Several tribes would get together in the fall and collaborate. Scouts gently herded buffalo into a run that was bordered by natural and man-made barriers; sometimes an Indian wearing a calf skin imitated a wounded calf to get the herd to move closer. At a moment carefully chosen by the most skilled scout, everyone screamed and made the herd stampede, so that dozens or hundreds of them fell into the sinkhole. Arrows and spears quickly dispatched the buffalo that weren’t killed by the fall. Then the Indians did a mass skinning and butchering so they would have food, warmth, and all the other things buffalo provided them over the long winter. The sinkhole is now a 40 or 50-foot deep midden pile of buffalo bones, spear points, and other valuable Plains Indian artifacts. It is managed by a not-for-profit that hopes to build a big center on the site. I’d like to come back and see the dig.

There was no welcome sign when we crossed the state line, which is a minor disadvantage of following low-traffic routes. However, we did notice rain clouds to the south. The rain started with about ten miles to go, and by the time we got to the campground we were soaked. It continued until we went to bed. The weather forecast had been for a 20 percent chance of rain. Jim says that with the luck we’re having, this means that it will rain 20 percent of the time. Tomorrow we head deeper into the Black Hills.

Writing about social change and how it happens.