We woke up before dawn, packed the camper, and Sara rolled out with us at 8:30 am. Our campsite was three miles down a dirt road, and I had broken a spoke the last time I rode on a washboard surface. I didn’t want to risk it again. 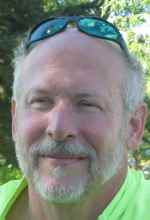 Our riding partner for the next eight days would be Jim’s younger brother Paul, a consultant who lives with his wife and three of their four children in Atlanta. Paul had been training hard on his new Schwinn Peloton racing bike, but he still seemed anxious, having never done this before. “It’s like having a summer job outdoors,” I told him. “You get up early and work hard until mid-afternoon. At the end of the day you’re tired and you need a shower. You sleep well and you want to go to bed as soon as it’s dark.”

During the shipping Paul’s bike developed a mechanical problem we couldn’t fix, so he and Sara drove into Helena while Jim and I started out. We rode 16 miles, first south then east, to Canyon Ferry Dam, another wad of concrete 225 feet high and1,000 feet long that holds back two million acre-feet of the Missouri River. This was near the headwaters of the Missouri, where Meriweather Lewis and his band of soldiers met up with William Clark in the summer of 1805. Lewis’s journal says that progress up the Missouri was hard – the Corps of Exploration averaged only about 18 miles a day on this stretch – and that a 16-mile canyon with sheer walls 1,200 feet high made it impossible to camp until after nightfall. The canyon was drowned 53 years ago by the dam Jim and I were crossing. Another dam just downstream had created the artificial lake where we stayed last night.

The question that always pops up in my mind when I see these dams is whether or not they are really necessary. On this ride, I’ve come to understand that this is the wrong question. Fifty-year-old people in Helena have never known a time when there wasn’t a dam, and Helena depends on its water and power. It’s sad to think that the beautiful wild river Lewis and Clark saw is gone forever, along with most of the salmon population and countless other species. But there is an endless list of sad thoughts you can have about things that are over and done with, and if you go that route all you’ve done is wallow in self-pity. The important question is how well we are doing with the West we have created.  We should focus on saving the natural places that escaped the dam-builders, dismantling the dams that are not needed, and restoring the landscapes that can be restored.

It didn’t look like Helena had made up its mind yet on this question. The ride to the dam was through rolling hills with lots of farms and pasture, and there were also lots of scattershot housing developments with trees less than two years old. A lot of the open land had Realtor signs on it, either “For Sale” or some developer’s come-on. It was sad to see Helena going the route of low-density sprawl that started in Los Angeles and reached its smoggy apotheosis in Denver. On the other hand, there is a land trust here, and there is an open space bond issue on the ballot. Whether it passes will depend on who works harder (Editing note:  the bond issue passed, barely).

We rode across the dam and gawked at the electrical station at its base. Then we continued south on state route 284, climbing and dropping in a series of steep hills that were small but tough. About 20 miles into the ride Sara passed us with Paul and his bike, now fixed. Shortly after he joined us, the road straightened out and flattened. It was 30 miles to Townsend. The Belt Mountains rose to the east; we will cross them tomorrow. To the west, across the big flat lake, were the Elkhorn Mountains of the Helena National Forest.

This is a big, open landscape that looks a little bit like a central California valley, although the mountains are more heavily forested. Huge wheat and alfalfa farms sprawled away on either side of us, mile after mile. Unfortunately, the wind kicked up from the south and blew directly in our faces at 10 to 20 miles an hour. We formed a peolton and struggled through it, but we were drained when we pulled into Townsend.  Jim later said that this was the hardest day of the trip for him.  One reason was that h had a slow leak in his front tire, which wasn’t apparent until it showed up flat the next morning.

We set up camp at the community park in the center of town. A friendly woman at the local Chamber of Commerce gave us a key to the bathroom, and we got electricity from a power pole. They didn’t charge us anything. When the schools let out, three little girls rode by the park on their Huffy bikes with 12-inch wheels. One of them had streamers on her handlebars. Go girls, go!

Jim, Sara, and Paul went to the Mint casino for mid-afternoon milkshakes. I went to the Community Library, which was also full of after-school children since it is attached to the public school complex. I could see high school football practice out the window. One of the sweet regrets of this trip was seeing so many places like Townsend, which seem vital and interesting and full of stories, but having only an hour or so to be part of them before it was time for the next thing. I guess I have to come back.