The Clark Family Cabins are a great place to camp, with a family of pet bunnies and cabins across the way that are outlined in white Christmas lights. Jim and Sarah realized with a shock that they stayed here 15 years ago shortly after they pulled in.

Day 1 of the ride took us from Bay View State Park, on the east shore of Puget Sound, through the delta of the Skagit River and then along its banks to the foothills of the Cascade Mountains. Before we rode, we met Martha Bray, Conservation Director at the Skagit Land Trust, near one of their projects on Fidalgo Bay. I made a video of Martha describing some of the group’s work, which is available online at http://www.c2c4conservation.org. Then we made a second video on the mud flat near the State Park (it was low tide). We dipped our tires in the Pacific (in spirit at least), and then we were off. 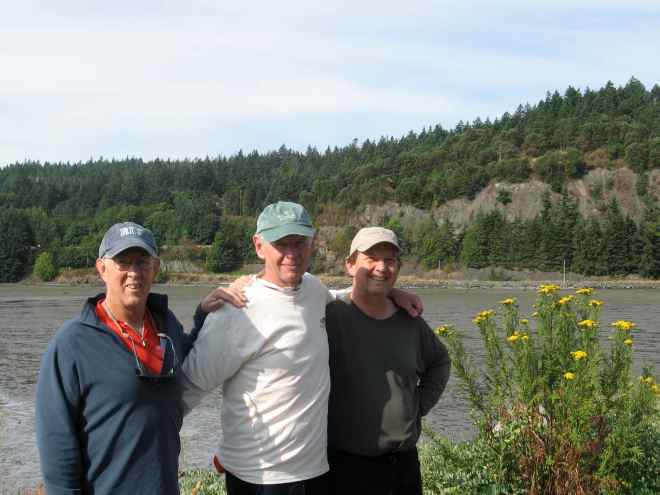 We rode east along farm roads through rich agricultural land. The father of all that soil, Mount Baker, loomed at 10,000 feet in the eastern distance. After about seven miles we passed over Interstate Five, and then went along more farm roads. The scenery changed ; suddenly there were tall hills to the north and south of us. It was about 70 degrees and sunny and so beautiful that (l-r) Bill, Jim, and I took turns making whoops and exclamations and all those things you do when you can’t put something wonderful into words. Jim and I have been tallking about making this ride for two years, and all day I was having trouble processing the fact that it is finally underway.

We took a break at a simple little park in Sedro-Wooley, an ag town, with a small group of mommies and kids and dogs standing at attention near the monkey bars. Then I had a flat tire. It took a while to fix – it wasn’t a simple problem – but we did fix it, and the reward was a 30-mile cruise along the south bank of the Skagit River. What a road.

The Skagit is greenish and fast-flowing and so cold that your feet hurt just a few seconds after you put them in it. It is largely glacial meltwater from Mount Baker, which happens to be an active volcano. Loren Ihle, an old friend I visited the day before, told me that every few hundred years Baker lets off a huge jet of super-heated gas that flash-melts a great deal of the glacier. The water courses downhill and picks up mud and rocks and boulders and becomes what is called a “lahar,” a wall of mud several dozen feet high moving about 60 miles an hour. That’s where all the great soil comes from. Oh course, a lot of people have moved into the area since the last lahar, but that’s life in the American West.

We rode for several hours along the Skagit, watching as the hills closed in on ether side and got taller, and every so often there would be a glimpse of something craggy and snow-capped in the distance. We did not climb very much – that starts tomorrow, and on Thursday we will climb about 4,000 feet. I think the best words to describe our attitude toward Thursday are “confident, yet respectful.”

At the town of Concrete (hometown of author Tobias Wolff and the setting of his great memoir, This Boy’s Life) we met Washington State Route 20, also known as the Northern Cascades Scenic Highway, which will be our route for the next 400 miles, give or take a few. Concrete is a worn-out looking place; the concrete plant has closed. We got laughed at by a drunk couple sitting in front of a bar called “The Hub” that was blaring Lynyrd Skynrd at 4pm on a Tuesday afternoon. Fair enough.

In a flash we were back into the feast of scenery and, 15 miles later, the day was over. Tomorrow we start the Cascades in earnest. -Brad